Do you want to activate millions of gamers around the world with games that represent their personalities, interests, and motivations?

In our new whitepaper, we discuss the global opportunity to activate female gamers. Passionate female players exist, and we have some ideas on how game developers can create games specifically for them.

Get in touch with us for more information.

Here are our five tips for creating games geared toward women.

1. Develop a narrative that appeals to female gamers

We’ve seen it for years when companies localize their gaming content to new markets: you can’t force-fit a narrative that works for one group or culture upon another. That logic applies when transcreating a Chinese game’s script for a South American audience, and it applies when striving to excite female gamers with narratives and goals that were originally designed for men. To compel women to play games, you need to design narratives that appeal uniquely to their interests and behaviors.

One company that has done that successfully is Shinezone Network. In 2011, the Shanghai-based company launched Flower Shop, a beautifully-designed game in which players run their own stores.

“Targeted at women in Europe and  US markets,” writes Shi Jing in a ChinaDaily article, “[Flower Shop] became one of the most profitable of its kind within less than a year, according to Facebook rankings.” The game found success largely due to its social networking functionality—a strong motivator for women.

When creating new games, take a page from Shinezone’s book. Consider the types of games that might most appeal to women—strong design, ease of use, social connectivity—and design with those themes in mind.

And while you’re taking one page, take another—from the film industry, whose Bechdel Test celebrates gender equality-promoting films and exposes those that relegate women to purely secondary roles. In 2011, UX designer Elsa Bartley retrofitted the Bechdel Test to games. Her standard? “There must be a female character with whom you can interact, who doesn’t need rescuing, and who isn’t a prostitute.” Ensure your games meet—or better yet, exceed—that standard.

Similarly, think about how women are searching for and finding new games—and make sure yours doesn’t miss out.

Effective marketing necessitates a deep understanding of your target customer. Understanding both what games female gamers want to play and where they’ll look to find them can catapult your company ahead of the curve.

Get in touch with us and find out more about our gaming services.

For context, China comprises more than half of the world’s e-sports audience, which watches professional video game players compete at their craft. In 2017, there were an estimated 170 million e-sports players and fans in China. Most of those players are men, who generate massive social media followings and earn up to $2M per year. Professional female gamers earn less money, but they’re just as eager as their male counterparts to make a living doing what they love.

If you’re looking to make a name for yourself in an under-tapped market with large upside potential, considering collaborating with female e-sports players—a portion of the multi-billion-dollar industry could be yours.

4. Hire women to build games (and to break them)

Across industries, studies have shown that diversity in corporate leadership helps yield diversity in the products and services they offer. This is certainly true of the games industry, which has historically staffed a disproportionately high volume of men.

It’s been a vicious circle, says Tanya Short, a Montreal-based game developer in a 2017 interview with IGN. “If you create products primarily targeting a certain demographic, and that’s the prestigious product, then the people who play that product are more likely to want to build more of that product.” So, male developers create products for male gamers, who in turn are motivated to become game developers. Interrupting the cycle can be difficult for women—but it’s imperative in creating games that better represent what female gamers want, and thus promote further game play and purchasing.

“Having more women in the industry would help a lot,” said Will Wright, creator of The Sims, in a 2008 Fast Company interview. “We’ve been making games that cater to ourselves, to 40-year-old men...I think one of the reasons The Sims did so well with women is that 40% of our development team were women.”

But how can you encourage women to join the ranks at your company? First, ensure your corporate culture is inclusive, respectful, and encouraging of diverse perspectives and voices.

When recruiting, think carefully about the language you use in your job description. “In general, when a woman looks at a job description, she typically won’t apply if she doesn’t fit all the criteria,” says Jeaneane Falkler, VP of Lionbridge Gaming. “Conversely, if a man fits half of the criteria, he’ll apply. We’ve seen gaming companies that prioritize recruiting women change the way they phrase their descriptions, using words that excite and inspire women.”

But promoting diversity doesn’t stop at the top. Hire women to lead your teams and to create your games, yes—but also hire women to test them. Make sure diverse groups of people are interacting with your games before they ever go live, so you can learn from them whether you’ve succeeded or failed in resonating with the demographic they represent.

5. Continue to Invest in Mobile

The numbers are in: women are flocking toward mobile games, where they’re spending more time and money than their male counterparts—and this despite more male characters inhabiting and promoting these games. Most women who play mobile games think that 30% or fewer of these games are designed specifically for them.

If you want to start attracting female customers, go where they go. Invest in mobile. When coupled with strong female-driven narratives and a targeted marketing strategy, the investment could pay dividends.

Ready to learn more about the global opportunity to activate female gamers? We're here to help. Download our new whitepaper today or reach us out for more information. 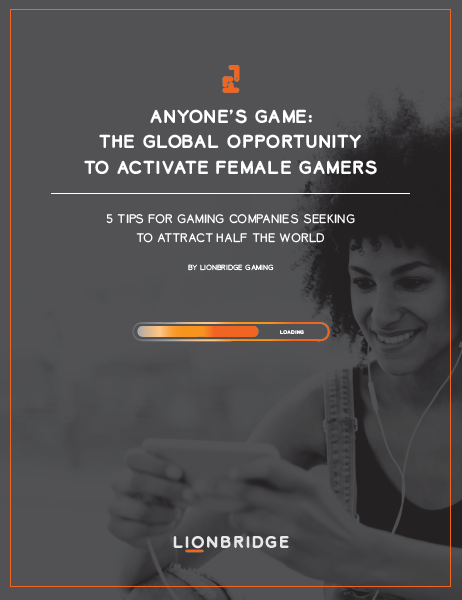