Transcreation Services: Why and When You Need Them

To advertise your company's products or services, you have created engaging, effective messaging to connect with your target audience. But without transcreation services, delivering that message can be trickier than you think—even in your own language. Coop, a major Swiss supermarket chain, learned this the hard way a few years ago, when it led its summer ad campaign with the question, “Chame das grille?" The word “grille” is derived from the verb "grillen" in High German as spoken in Germany, but in Switzerland the local Swiss German term is "grilliere." Using the High German word caused an uproar among Coop's Swiss customers —and prompted months of cross-border debate (in German only) about linguistic norms.

Coop’s advertisement which caused the language dispute (in German only) by using “grillen” instead of “grillieren”.

In this example, only one language (German) is involved. Just imagine how many potential linguistic and cultural blunders a company—your company—has to watch out for when creating messages in multiple languages. That's where transcreation comes in.

Transcreation is the process of adapting a message from one language to make it culturally appropriate for another audience. Rather than rigid, word-for-word translation, the goal of transcreation is to duplicate the intent, context, style and tone and emotion of the original in an entirely new text that's written specifically for a particular market. The term “transcreation” combines two words: “Translation,” the rendering of text in another language, and “creation,” the act of producing something new. This highly creative process is provided with the support of language professionals who are experts in the linguistic and cultural features of your target market, and are very familiar with your industry.

When rendering hard facts in another language, you don’t need transcreation. A stock report, for instance, tells readers about the trend of a stock’s price and what’s been happening at the company to elicit such a trend. This material is factual, non-emotional: what you need is a translator with specialized knowledge of your industry. That's very different from more evocative content, including:

These kinds of messages communicate through emotion, tone and style and they often play with language and images. Here, cultural and linguistic nuances are especially important and literal translations rarely work. This is where you need a transcreation service.

How do I get a transcreation?

The more detailed the information you provide, the more accurate the result will be in the target language. In addition to the source and target language, your language service provider will need to know some specific things about the transcreation you want. This includes answers to the following questions: 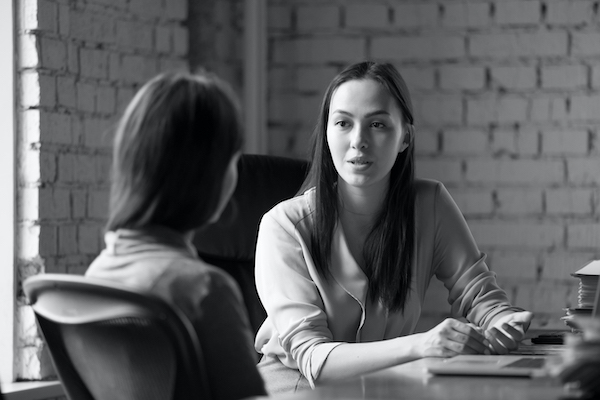 How does transcreation work at Lionbridge?

As soon as we have your source text and all the information we need for the transcreation, our creative language professionals get to work. Not only are they experts in the language and culture of your target market, but they're also familiar with your industry and drive every phase of the transcreation process:

How can transcreation help my business? 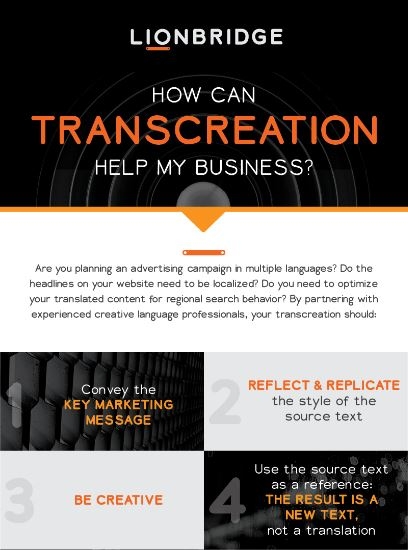 When your source text contains idioms or phrases that are not familiar in a new market, we recommend transcreation to make your message resonate. For example, when Lionbridge launched an 8-part blog series entitled "Going Global 101," we knew that the term "101"—American slang for an entry-level or introductory course—would not be familiar to international readers. When preparing the series for German readers, the best word-for-word translation was “Globale Präsenz 101” (literally “Global Presence 101”). Instead, our creative language professionals recommended the transcreation "Internationalisierung leicht gemacht" or "Internationalization Made Easy," a much more faithful rendition of the intended message.

To improve in-market search rankings, we recommend a mix of transcreation and content ideation for your web content copy in regional markets. With the advent of Google’s algorithm BERT, natural-language search queries for longer phrases and questions will increase. A translation may miss key search phrases and questions used in-market, if it stays too close to the source text. In these cases, use transcreation to add key phrases from SEO analysis in an intelligent and coherent way to your web copy. Read more in this blog post on content creation for Multilingual SEO in 2020.

Are you planning an advertising campaign in multiple languages? Do the headlines on your website need to be localized? Do you need to optimize your translated content for regional search behavior? By partnering with experienced creative language professionals, your transcreation should: