The Difference Between Simplified and Traditional Chinese

Learn where, when, and how to use the appropriate Chinese written language

China is a rapidly expanding global force. It tops the charts with the world's largest population and a booming economy second only to that of the US. For global companies—or companies hoping to go global—there is no denying the power of the Chinese language. As more and more businesses strive to leverage this linguistic power, the demand for Chinese language translation services skyrockets. But when translating documents for Chinese speaking populations, businesses, or their language service providers, are met by a serious linguistic challenge.


This choice leads to the question: What’s the difference between a traditional and simple Chinese writing system? Answering this question, of course, is anything but simple.

Look at the difference in how the word ‘leaf’ is depicted below: 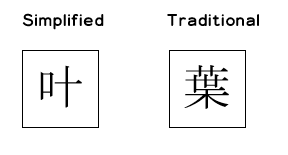 In order to make characters easier to read and write, Simplified Chinese features fewer brush strokes than its ornately designed counterpart. In the example above, the character, 叶 meaning ‘leaf’ has notably less embellishments than the Traditional version, 葉.

Some characters look exactly the same—especially in situations where the Traditional version was too simple to warrant changes. For example, the character 人 meaning 'person' retains just one form that looks identical between Traditional and Simplified Chinese texts.

The History of Simplified Chinese

Let’s back up. Why was the Traditional Chinese writing system overridden in the first place? With over 50,000 characters in its lexical inventory, the practice of simplifying the writing system is far from unprecedented. Different versions and interpretations of the Chinese script have been circulated unofficially for years. Then, in 1949 when a new government was established—The People’s Republic of China—an initiative was put in place to develop an official, simplified writing system.

The goal was to make reading and writing more accessible to a largely illiterate population. Chinese linguists worked in partnership with the government to simplify approximately 2,000 Chinese characters. In 1949, the new ‘simplified’ writing system was officially adopted and over the next few decades it was incorporated into the school systems and the distribution of documents. Today, it is the standard writing system for over one billion Chinese citizens.

Where Are Traditional and Simplified Chinese Used?

Simplified Chinese, on the other hand, is the standard script for residents of mainland China—some 1.43 billion people. A small subset of this population—mostly older generations—can still understand Traditional Chinese. However, for the majority of Chinese-speakers in mainland China, texts translated into Traditional Chinese are likely to spark confusion.

Interestingly, an increasing number of residents of Taiwan and Hong Kong are able to read simplified texts. Still, businesses looking to truly resonate with these markets might consider communicating to them in the language they are accustomed to—Traditional Chinese.

Is Traditional Chinese Ever Used in Mainland China?

Although Traditional Chinese has largely disappeared from everyday use in most of mainland China, people occasionally use it in formal settings or when emphasizing a particular word or phrase. Additionally, foreign media or subtitles of videos from Hong Kong or Taiwan can sometimes include Traditional Chinese.

In terms of market size, mainland China vastly outranks its fellow Chinese speaking neighbors. In terms of market value, however, the consumer bases in Hong Kong and Taiwan should not be overlooked. At Lionbridge, Traditional Chinese still ranks in the top 15 most requested languages for translation. In order to maximize your impact with a Chinese speaking audience, you need translation capabilities in both Simplified and Traditional Chinese.

Due to dramatic differences in regional use, character appearance, translation between Chinese writing systems requires a sophisticated understanding of these languages. The importance of finding a language service provider experienced in both Simplified and Traditional Chinese translation cannot be overstated.

Lionbridge has a reputation and record of success that you can depend on. Contact our team to learn more.